How Merkel’s Germany dominates the EU 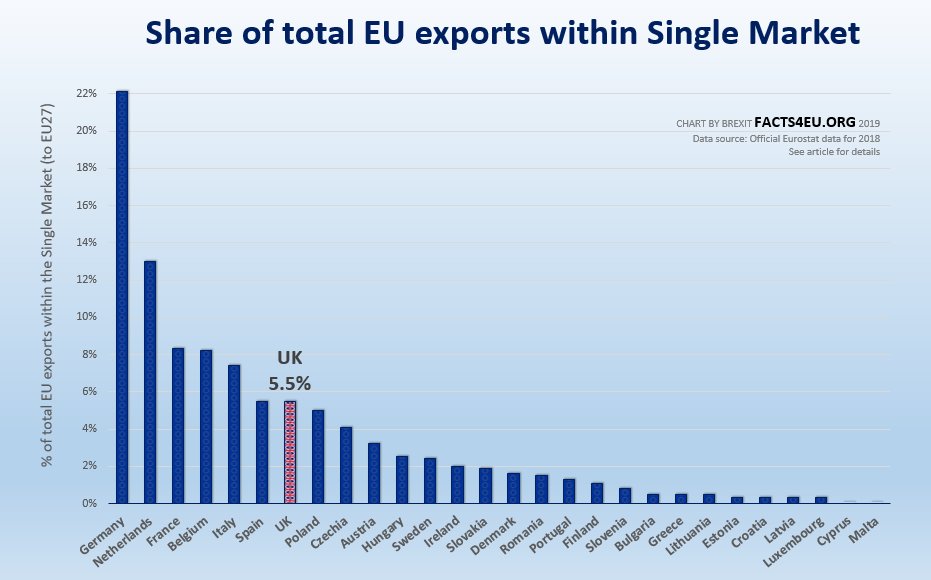 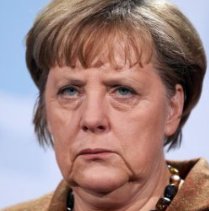 Germany also has more than DOUBLE the share of World exports, compared to the UK

Yesterday Boris Johnson had dinner with German Chancellor Angela Merkel. In this report we show how Germany is dominating in the EU and why it has no desire to change the rules.

Exports within the Single Market

Exports to the rest of the World 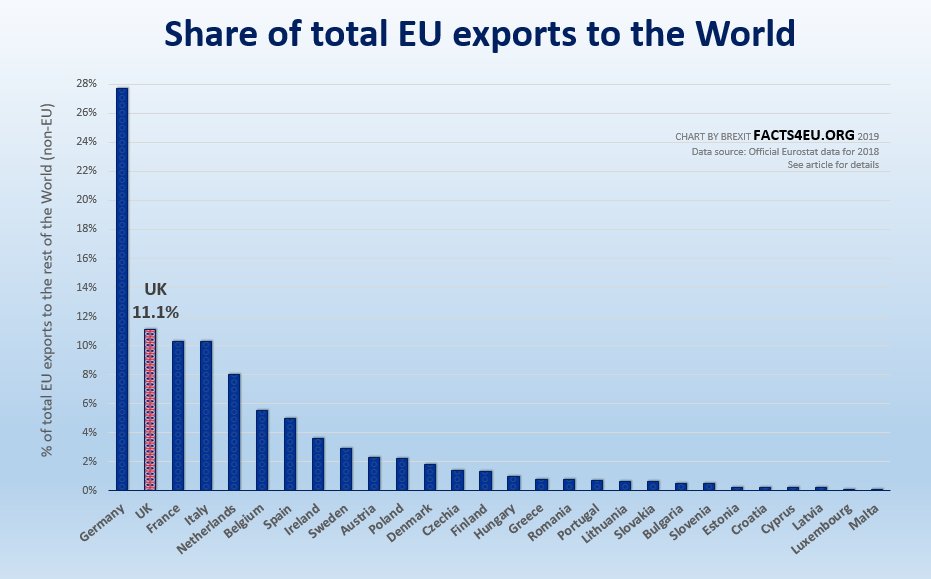 In the press conference following their meeting in Berlin yesterday, Angela Merkel confirmed that she had given the United Kingdom’s Prime Minister 30 days to come up with fresh proposals for avoiding the Backstop imposed by the EU.

Critically Frau Merkel showed little signs of wishing to modify any of the other aspects of the surrender treaty (known as the Withdrawal Agreement) which Mrs May and her Remainer civil servants provisionally agreed with the EU. The removal of the Backstop is only one part of the much larger problem.

Germany’s economy may be stumbling, but it remains the dominant economic force in the EU. The charts above show how much it is benefiting from its EU membership, particularly in relation to the Single Market.

Conversely there’s the UK – the fifth largest economy in the World – which is languishing in seventh place in terms of sales to the rest of the EU.

In terms of global exports the UK does better, but not in comparison to Germany. In very broad terms, Germany has over one-fifth of the EU market, compared to a miserly 5.5% for the UK. When you have such a large base of ‘the captive market’, it’s easier to leverage production and sell more outside the EU too.

Remainer politicians are forever going on about “the benefits of the Single Market”. We suggest they might add “for Germany” at the end of their sentences.

To donate something to keep us going, simple and secure methods are below. Thank you.

[ Sources: Eurostat ] Politicians and journalists can contact us for details, as ever.

No wonder she looks so miserable!

Boris has thirty days to work out that the EU is two countries: Germany and France.

Hi, Patrick F:
I suspect that Boris, like many people in the UK, already know this!
Well, actually, France is Robin to Germany's Batman, given enough concessions to feed it's ego.
I'd say the real question is why people in other countries haven't worked it out but when you've got your hand out for money (the balance of contributors to non-contributors is badly skewed) or you're up to your eyeballs in debt to Germany and France *(Italy,Spain and other Eurozone members) it's probably best not to think about it.
If the ROI think th a the EU is their friend over the backstop, let them remember this when he EU lobbed them over issues like Corporation Tax but Juncker's country is left untouched.
* Can someone do a piece on "Target 2" and how the Eurozone turned a payment system into a credit cad please.

A border in the Irish Sea splitting off Northern Ireland from the Union was offered and rejected by Theresa May. The 'backstop' in the WA has never been accepted by Parliament.
Boris Johnson has said he will implement the referendum and supposedly is seeking ways of placating the 'no deal' MP's.
Is he playing a double game, knowing that on 20th of September it will all come to nought once again, with only another 39 days to Article 50 expiring.
Remember only the Government can put the draft withdrawal agreement before Parliament again. If the backstop (unlikely) is removed it will be slightly different.
Only the Commons can vote it through. The real reasons for the majority of MP's rejecting the WA will not have changed in the meantime.

Lets face it, the political class are just not capable. They care more about diversity, sexual preferences et al than doing anything for the good of Queen and country. If they had their way, all countries would have no borders and criminals and major corporations could get away literally with anything.
What a mess the political class have made. They like Bankers deserve no respect. In fact they saved the 'Bankers', but British Steel can be sold off to another distant land, just like the equity and water companies. Halal should not exist in the UK. Why are there so many Mosques? Why on earth is sharia law existing in the UK.
What a mess the political class have made, and not one of them will face the music or have their golden parachute strings cut for their abject failures.

if this Country is to survive on it's own then it has to start making things again the banking sector in Britain is not trusted, the current LibLabConGreenSNP regime are not up to the job and needs replacing and to hell with Germany, France the EU etc

''...she had given the United Kingdom’s Prime Minister 30 days to come up with fresh proposals...''
Well - isn't that kind of her?

L Jones that is what is infuriating the fact is Merkel and Macron have the temerity to think WE are going to be on Our knees to these People, wrong Prime Minister for a start the last 4 Premiers were weak Major to May , the current new one is not so much

This is simply the long term planning of the EUSSR! The continuation and expansion of the "Fourth Reich" by any means, so far short of war. This planning started with the "Red House Hotel" meetings in Strasbourg in 1943 when German industrialists and bankers first knew that continuing the war was a loosing proposition economically. Starting with the European Iron ,steel and Coal Union, it has morphed into the EUSSR Super-State. It is "Anti-Democratic" and has no legitimate claim as to having any power over Europe. We the People, the DEMOS in Democracy voted for non of this!

I give the EU 3 to 5 Years before it collapses