Tactical voting - Will you vote for second-best if you have to?

Voter volatity data shows how Brexit may be the decisive factor 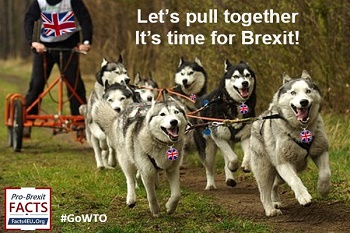 94% of voters identify as Leavers or Remainers. Only 62% identify as Conservative or Labour

Predicting this election result is only for the brave

Only a very brave person would predict the outcome of the coming General Election on 12 Dec 2019. Below we give readers some interesting background information which may help to identify some key catalysts.

Brexit Facts4EU.Org has reviewed the latest authoritative research on voter behaviour, from the ‘gold standard’ British Election Study (BES), to the work of Professor Chris Hanretty at Royal Holloway (Univ of London), to the work of Professors Geoffrey Evans, Professor Jane Green and others of Nuffield College Oxford, and to the academic papers of the Social Science Research Network.

The largest switch in 2017 was from UKIP to the Conservatives, which won them the election. In 2017, small parties lost many of their 2015 voters: 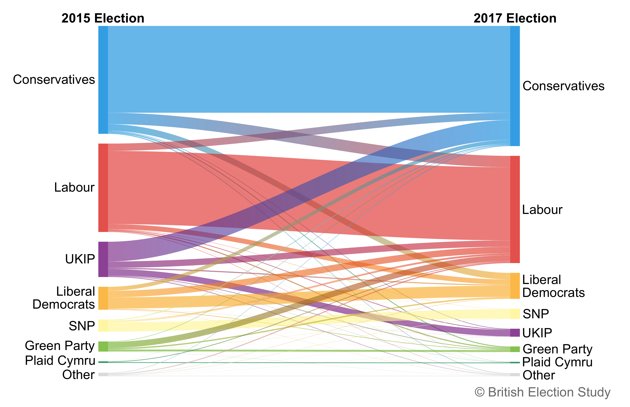 What about the Brexit factor?

The Leave/Remain Brexit factor was enormous in the 2017 election

[Note: We will be writing about the latter statistic above in a further article.]

Above we have given percentages of voter numbers. The key thing, as all readers will know, is that any General Election is not decided on national percentages, but on how these votes are distributed in each constituency. This is what determines the outcome of any election.

For example – and quite extraordinarily – Theresa May managed to secure the largest percentage of votes cast in the 2017 election since 1983, and yet she lost her overall majority in Parliament.

“We do expect to see big shifts defined largely by Brexit”

We are indebted to all those academics who have studied the results of elections and referenda in such detail. In our article above we have analysed their research and have tried to identify some of the most interesting facts for readers.

Our overall conclusion is that this election will be won by the smartest political operators. We believe that any parties which understand the local-level nature of this fight will do well, because the maximisation of resources and the winning of each target seat has never been more vital.

This of course raises the question of the Brexit Party, and how it chooses to fight. We understand that Nigel Farage will be announcing the party’s intentions tomorrow.

Thank you to those of you who donated yesterday – you will be getting personal emails from us today. We still need far more donations if we are to make a serious impact on the Brexit aspects of the election. If you are among the tens of thousands of readers who have not previously donated, we hope you will consider it today. Quick and secure methods are below this article.

[ Sources: The British Election Survey | Prof Chris Hanretty, Holloway, London University | SSRN ] Politicians and journalists can contact us for details, as ever.

Interesting article.
The problem is that our system forces a voter to pick one political party but in reality that voter might be "Conservative" on some issues and "liberal" on others and therefore has to compromise on the "best fit" or vote to keep a party out!
This election will be fought on one major issue, Brexit, but if you want it you are going to have to vote tactically.
I said yesterday that my head said Tory....thanks to the person who linked to "spiked" and the "one UK" website......it said Tory, too.I've emailed my Tory candidate in the past and he came across as frustrated as I am about all the delays.
So here is what my heart says: if you live in a Remain MP's seat which stands a chance of a Brexit Party MP , best of luck, it's essential to keep the Tories honest and we need them in Parliament.

Theoretically, it shouldn't matter who we vote for as the democratic mandate was clear - to LEAVE the EU, and ALL parties that claim to be 'democratic' should be ensuring that that mandate is FULLY HONOURED. Once done, certain parties can then campaign to rejoin - at the next election. In reality there is just one main EU-led liblabcon party.
Sadly, we do not live in a democracy any more. We are under foreign occupation with a Vichy Govt & Parliament. The last three (Conservative) PMs have repeatedly betrayed their country & people. All have had ample routes & options/challenges at various times to deliver the mandate to leave that they have DELIBERATELY ignored.
Yes, there was tactical voting last time to get what we voted for. Those not taken in by the May mantra, reducing her majority, have been proved right. Her true plan was to remain by deception of the public, via a Treaty cobbled together by Snivel Serpents & the EU. Just like our unlawful 'entry'. Boris looks no different.
Most also voted last time in the belief that their MP would honour the mandate, & now know different. We can see that the con party, in the main, think that usual troughing will recommence with the readmission of those who voted to hand control of leaving to the EU. Faux leavers have brought us to where we are now.
It is time for us to stop them playing their 'games' & vote for what WE want, honest and democracy supporting MPs. It is the only way that we can start to clear the swamp of the EU & CP placelings. The con party do not seem to really believe in leaving as they will not enter an electoral pact to ensure that it happens. Neither are they allowing local constituencies to select the candidate that would represent their views. Only vote for conservatives where they have a clear track record on supporting leave. Brino is not leaving.
Perhaps your Brino stamp could be chains to the EU, but no tick/cross. It's certainly helpful for those who are torn.

Carol, I provided the link to Spiked - this is what it said: 'Our advice is to vote for the candidate who best represents or understands the Brexit spirit and whose victory would send the clearest possible message to the Remain establishment that their stranglehold on political progress is over. That could be a Tory candidate, a Labour candidate or a Brexit Party candidate: if they are committed to upholding the vote of 2016, consider giving them your vote in this election.'. In no way is that a recommendation to vote Tory.
-
Comment quoted from Independence Daily :
"I will not be surprised if Boris abandons BRINO during the election campaign in order to kill TBP fox. As soon as he gets a thumping majority in the HOC he will resurrect the withdrawal agreement, call it BREXIT and tell us we are all united once again so we must move on". Again, in no way is that a recommendation to vote Tory.
-
Clearly some Tory Mps will say anything to get your vote. Here is a comment from one that I emailed a few days ago: "Even Boris’ deal has the option of WTO in it but Parliament votes against that too.
That’s why Boris is calling an election so he can leave without a deal..."
-
I am glad you admit to Never Trust a Tory as in " it's essential to keep the Tories honest."
-
There will be many people and the press providing disingenuous arguments to vote for the Conservatives. If your heart truly says Brexit Party then vote for them. The more votes the Conservatives know they are not going to get from Leavers, then the more likely they will be forced to drop the appalling Boris Surrender Treaty. Frankly, I would rather vote Labour than vote for this Tory Surrender.

Good post, Not4EU.
The only Conservatives I would like to see elected this time round are John Redwood, and perhaps Owen Paterson. The rest should be dumped - We certainly do not 'need them in Parliament' as Carol asserts.

I may have misread Carol, there . Perhaps she meant that 'we need The Brexit Party MPs in Parliament'? Apologies if so.

5. James Bertram: my bad grammar!
We need Brexit Party MPs and Leaver Tory MPs to work together to get Brexit done and to get some desperately needed reforms through.
I really don't think either party can do it on their own and I have no reason to trust a Tory majority although many constituency associations will do their best to weed out the worst remainders.

Agreed, Carol - we need Brexit Party MPs and Leaver Tory MPs to work together. This can only happen if the Tories drop their appalling Surrender Treaty entirely and back a Clean-break Brexit. If they did that, then I would vote tactically, vote with my head, and, where they had the best chance of winning, vote for the Conservatives until the cows come home. But until then...

Is your MP standing for re-election? Which side of the fence are they on? If they are pro-remain in a marginal seat can you vote tactically.
With so many MP's retiring and others having switched Parties and looking for seats the balance of pro-EU against pro-leave may change.
The Conservative constituency membership have the greatest opportunity to select a leave candidate.
I think we all agreed we do not like the WA.
The European Council adopted a decision to extend the period under Article 50(3) in the context of the UK's intention to withdraw from the EU. The extension is until 31 January 2020 to allow more time for the withdrawal agreement to be ratified.
This is what they said twice before and Parliament ignored the reason for granting the extension. I still believe the legality of three extensions is questionable. So far they have not said the WA is closed to negotiation. When they do they leave the Benn Act without a purpose and thus in UK law the extension is pointless. The new Government will have a piece of legislature upon which they cannot act.
Johnson will be a fool if he does not have a pact with the BP.
Get a large majority in league with the BP and he can even let his agreement die in the certainty that come 31st January he cannot be forced to ask for a a further extension, which is unlikely to be forthcoming anyway.

Sydney, I'm sure this is the kind of conversation that is going on between the two parties as I write. If anyone read the comments to John Redwoods Diary yesterday [ https://johnredwoodsdiary.c... ] then, from the overwhelming tone, it looks very much like the Tories are heading for 9% and oblivion.
We will see if Johnson remains a fool, or whether a pact has been struck with the Brexit Party, tomorrow - when The Brexit Party is due to launch its campaign.

Brexit Central has an excellent article today reminding us what is wrong with the EEA.