PLEASE NOTE: This was written in 2018 / early 2019 but the same principles apply today. To see the latest factsheets which you may wish to incorporate, please click here.

The only thing that now matters is deluging MPs with letters,
telling them to respect democracy and to respect the result of the EU Referendum.

All information on how to do this is below.

This is a serious campaign, backed by politicians, pro-Brexit groups, and ordinary voters in their thousands.

What is the ‘Go WTO’ campaign?

The simple idea is for the public to make clear to the Remain-dominated Parliament that the Referendum vote must be respected in full and that the UK must leave the EU - NOW.

What can you do to help?

Without you this campaign is nothing. Unless you do something, all the many hundreds of hours put in by many people will be in vain.

There is one major, incontrovertible priority for all those who voted to leave the European Union in the Referendum and who wish to see this implemented NOW.

Forget rallies preaching to the converted, forget protests outside Parliament, forget tweeting, forget posting on Facebook… you can even forget talking back angrily to the BBC or Sky News whilst watching their anti-Brexit coverage.

Put all these things on hold and do one thing.

We are now entering the final Battle for Brexit

Quite simply, there is nothing you can do which is more important than threatening the livelihood of your MP. This is the only thing which might influence some of these anti-democratic and arrogant MPs, and convince them of the strength of feeling around the country.

Appeals to them to read some actual facts about Brexit won’t work on their own. So many of them stand up in the Commons day after day and repeat what they’re been told, despite not having the barest acquaintance with any of the official facts we’ve been churning out daily for three years.

Our advice is to hit them where it matters to them : their majorities, and the vote share of their parties.

Letters, surgery visits, calls, and (only in the last resort) emails

Once again we must stress that sending an email to your MP is of limited value. They already receive thousands and it’s mostly their assistants who deal with them. Thousands of letters are much more difficult to overlook.

Below are some options and ideas which you could use. These come from our library of letters and flyers. The best thing of all of course is to go to your MP’s surgery and tell them in person. Or call their constituency office or their number in Parliament. Failing that, please send them one of our letters, or much better still write one of your own. 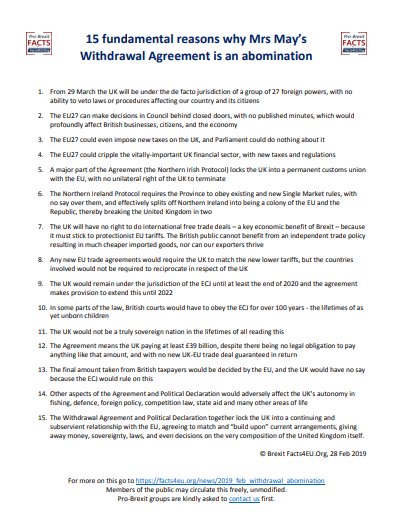 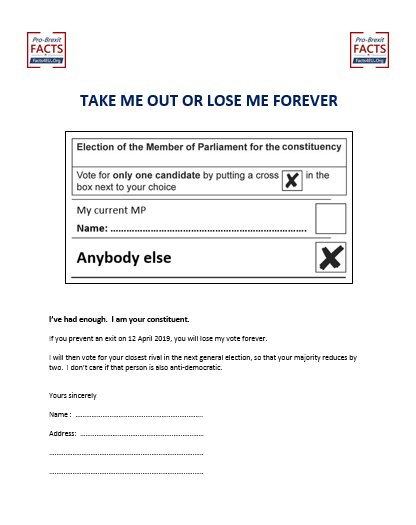 Some of our latest one-page flyers are below

You can download any of these as a PDF by just clicking on it. Please then send it to your MP today.

All the advice has been available in our ‘Brexit Battle Pack’ since last summer. It’s full of information on how you can act to achieve the best possible effect. It even includes advice on how to contact the media when they produce biased reports.

- A Remain MP who thinks we must delay Brexit

Who is backing it?

We have 4 lead MPs, 3 lead MEPs, and 15 pro-Brexit organisations all supporting this public campaign. It was initiated by us, Brexit Facts4EU.Org, but this is your campaign - for ordinary voters.

It is important for any public campaign like this to have the support of MPs who respect the vote to leave the European Union. All four have made themselves available for interviews with the BBC, Sky News, and ITN, as well as to the press. 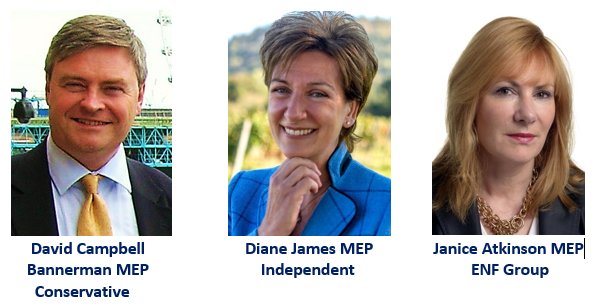 On behalf of our readers we would like to thank our supporting MPs and MEPs for putting aside their political differences in the national interest.

What does the ‘Go WTO’ campaign consist of?

The only thing that can now make a difference

Parliament has shown itself to be full of people who don’t respect democracy, despite using it to gain their current employment. Specifically they don’t respect the result of the EU Referendum.

They must now be told to respect the Referendum result, and vote to allow the UK to leave NOW on WTO terms with some sensible side agreements on things like citizens’ rights. They must be told that if they do not, you will never vote for them again.

Remain groups have been active in the last two and a half years, while most Leave groups slept. (Brexit Facts4EU.Org were the only group which carried on researching and publishing on 24 June 2016 and every day since.)

We're presenting a simple, positive, and factual case for a true Brexit NOW.

Please contribute today. Everything we do costs money and we really need your help right now.

Sadly, MPs have been allowed to gain the view that the majority who voted for Leave will not kick up a fuss. Please help us to prove them wrong.

We rely on public donations to continue. Please give something today if you can. We badly need funds to carry on.

Don't agree with Harvey. Love the new site and find it easy and quick to navigate. And I can see you're improving it each day. Well done for never stopping!

I appreciate your fine work. Don't get me wrong. It just needs some tweaks to navigate. The link to the mini posters on the GoWTO page would help. I do think you should post each of the 16 mini posters on your Twitter individually with a link. Just a suggestion. All the best.
Kind regard
Harvey

I've been following your campaign from the beginning. I read all the articles you published here and also and your News pages - very impressive work. I decided to make a small but regular donation to this cause because it's so important that we all get behind this.The more you can promote this the better.
I sent your letter / flyer to my MP a week ago. My wife did hers at the weekend.
Go WTO!

The establishment machinery is firing on all cylinders to work against a clean WTO exit. We must push back on this and do everything we can - whilst we still can. Please everyone send out a letter and encourage fellow Brexiteers to do the same!
We need every single one of us to tip the balance back. #GoWTO

We need action! It looks like most of our MPs - who we put our trust and faith in - won't support us either, for whatever reason. We're on our own people, so we need to be together. Join the WTO Campaign to grow it as large as we can!

It's great that you are stressing the positive aspects of WTO.
Any chance of a rebuttal image...showing up the Project Fear lies against WTO. Planes will fly because..., no traffic problems because... no Customs hold ups because...medicine worries - NHS reassurances etc?
Many thanks
REPLY FROM BREXIT FACTS4EU.ORG TEAM: Thanks for the encouragement, John. This is one of the items on our agenda. Unfortunately we're operating on minimal funding and so we can't immediately do everything we would like. Rest assured we're working as fast as we can, on a range of initiatives! :)

It's ridiculous to get rid of the "n0 deal" option because there's no way we want it. So those naive MPs, based on the same logic, would get rid of our nuclear deterrent unilaterally - what a pathetic bunch!

WTO/No deal is our only Leverage now that the Remainers have done everything they can to weaken our negotiating position. We won, we shouldn't compromise!! You don't tell an Olympic athlete to compete again because the losers did not like losing nor do you ask him or her to share his Trophey with his losing competitors? This Nation voted Leave, which means Leave. Not part of it or a portion of but ALL of it. We were once a proud Nation but yet we can't pride ourselves in thinking that we are good enough to be successful without being controlled? I will NEVER change my mind!!

NOTE: We badly need to update this table with lots of other articles we've produced in recent weeks, but we just don't have the resource to do a fraction of what we need to do. Please help us with a donation if you can.

Most of these are on the GoWTO page in the main article, and they are downloadable there.

Articles on other sites:-

We will add many more articles when we get time. Please donate so we can do more each day,