Nicola, why won’t you tell your voters who really buys from Scotland?

Exclusive : Without ‘the Rest of the UK’, Scotland’s exports would be slashed by 60% 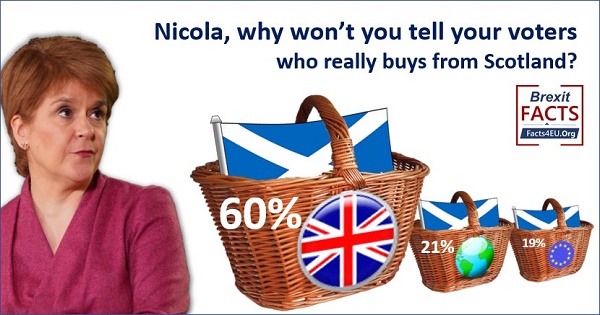 With less than 10 weeks to go before Scottish voters go to the polling stations to elect their Member of the Scottish Parliament (MSP), Facts4EU.Org is providing some much-needed clarity and reality, in the form of summary reports we have researched from official data released by the Scottish government.

In the midst of Nicola Sturgeon’s current political crisis, the SNP has continued to laud the EU and attack the rest of the UK.

Yesterday in the Robert Burns Committee Room, former First Minister and former SNP leader the Rt Hon Alex Salmond gave his damning evidence to the committee of MSPs tasked with uncovering the truth about the SNP Government's recent behaviour, as well as the behaviour of senior Scottish civil servants. 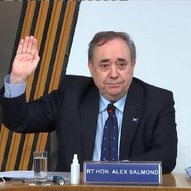 Today Facts4EU.Org uncovers some more truth for readers. In this report we start by showing the basics of who Scotland sells to. What follows comes from the latest data we have analysed from the Scottish government and its statistics arm. The data below is therefore incontestable.

Just who does Scotland rely on, to buy its products and services? 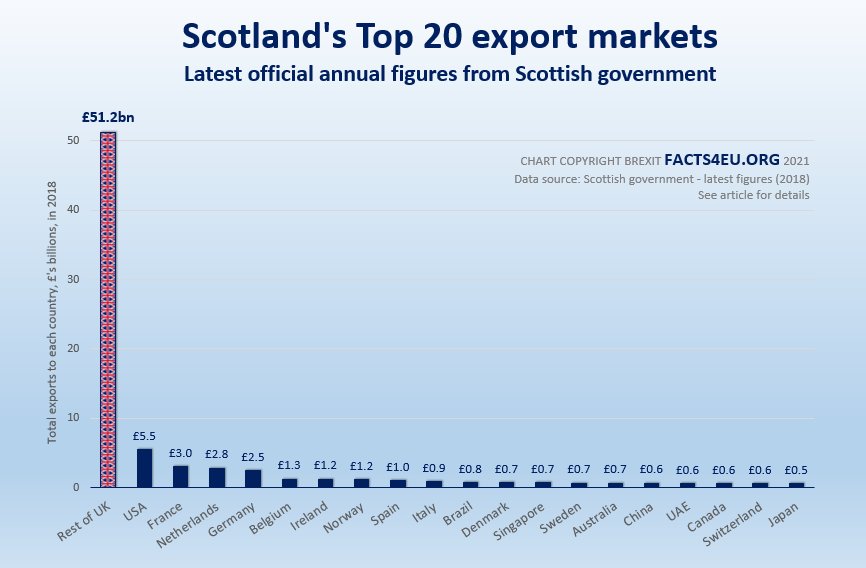 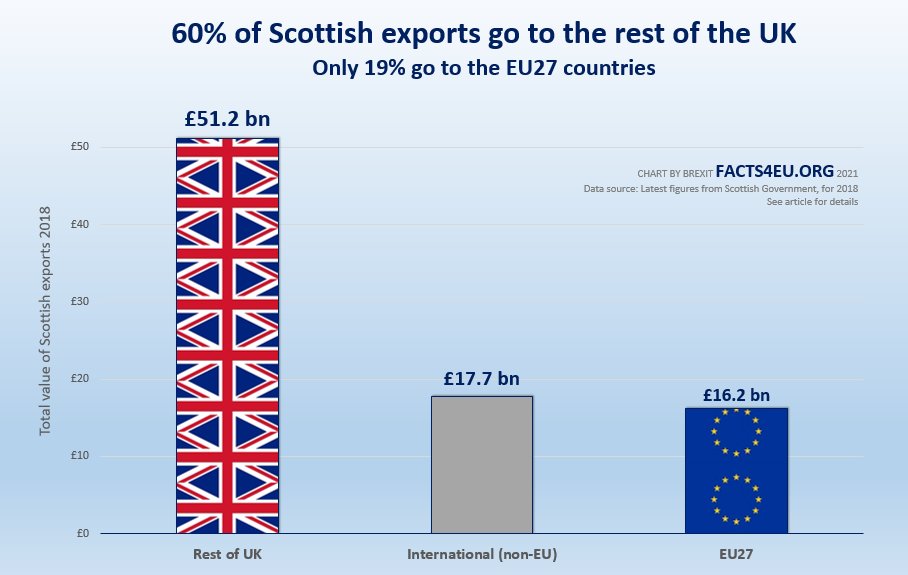 But aren’t part of Scotland’s sales to the rest of the UK for onward sale to the EU?

SNP nationalists often dismiss talk of the Scottish economy's reliance on the consumers and businesses in the rest of the UK. One claim which is regularly made is that these sales are in fact for onward transmission to the EU and to countries around the world.

No, they are not. Here is what the Scottish Parliament says in its last official report on this:

The SNP's Scotland is falling behind internationally

Our figures and charts above show that Scotland’s biggest market by far is the rest of the Union (the United Kingdom). Scotland has been a member since the Act of Union in 1707. This is the exact same single market which Ms Sturgeon wishes to leave and the exact same Act which she wishes to tear up.

When it comes to Scotland's performance internationally, even the Scottish Parliament in its latest report could not disguise how bad things have become. Here is what they said about the latest trade figures.

“International exports.... have remained broadly static as a proportion of GDP, whilst those of many similar sized nations have increased. Some of this decline can be attributed to specific events, particularly the decline in Scotland’s electronics manufacturing (the so called ‘Silicon Glen’). However, the general static trend shows that Scotland has not been internationalising at the same pace as its competitors.”

Scotland's exports have increased - the problem is that they have not increased at a rate to compete with comparable economies. As part of the research carried out by Facts4EU.Org, we can reveal that Scotland’s penetration of world markets is very poor. In fact there are now only 44 countries to which Scotland’s exports exceed the relatively small sum of £100 million per year.

If you missed it, the introductory article in this series on Scotland, the Union, and the EU can be found here.

Nicola Sturgeon and her SNP government have constantly found time - during the turbulence and the abuses of process taking place in the Salmond crisis – to praise the EU and criticise Brexit.

One simple truth is that the rest of the UK accounts for 60% of all Scottish exports, the rest of the world comes next with 21%, and the member countries of the EU account for just 19%.

The potential for Scotland once again to become a proud trading nation, freed from the shackles of the EU’s disastrous trade policies and performance and benefiting from the UK’s bold new initiatives worldwide, must now be considerable.

Ahead of the Holyrood elections, Facts4EU.Org intends to continue to publish occasional reports highlighting some basic facts regarding Scotland, its relationship with the rest of the UK, and the fanciful SNP notion that an independent Scotland would be warmly welcomed into the EU.

Could you be a part-sponsor of this series?

We are most grateful to readers who have donated so far this year, but we badly need more readers to do the same if we are to continue in our sixth year - researching facts, scrutinising, publishing, and lobbying MPs. Quick, secure, and confidential donation links are below this article, or you can use our Donations page here. 10 readers donating £500 per month, or 50 readers donating £100 per month, or 1000 readers donating £5 per month - on top of the one-off donations and monthly donations we currently receive, this would just about keep us going. If you have never donated before, please, please, keep us going with a donation now. Thank you so much. You will receive a personal 'thank you' email from a member of the team, but you will not be badgered by us for more funds, unlike some organisations!

[ Sources: Scottish Government official statistics | Scottish Parliament official reports ] Politicians and journalists can contact us for details, as ever.

Please scroll down to COMMENT on the above article.
And don't forget to actually post your message after you have previewed it!

A big proportion of that 60% will disappear with independence because people will decide not to buy Scottish products.

Brexitists argued that the EU would not stop selling to the U.K. - and vice versa - if the U.K. left. Remainers said so too - they just pointed out, correctly as it turns out, that we would be selling on much worse terms and that would make us all poorer.
Scotland is not going to stop selling to England - or vice versa - after independence. It’ll just be on worse terms.

It has to said that leaving the UK is not only going to cause a problem with trade , but also loss of currency, central bank, a hard border and the risk of up to one million jobs in Scotland reliant on the UK , as for that trade we will also be asked to leave the UK/EU trade deal meaning goods we buy including food will become more expensive with tariffs , then there is the balance of trade deficit at 10% because onshore we import more from England than we export and that deficit is some £16 billion, again not a good look for those pushing leaving the UK, we in effect will be asked to leave the UK and have goods more expensive and either with no currency plans or Sterlingisation were Mr. Wheelhouse and Mr. McKee of the SNP have said will mean higher taxes or cuts to public spending and told campaigners not to engage on the doorstep when asked about currency.
Time for some honesty from the SNP they should tell us in public what they fear in private

The extent of trade loss depends on whether indy Scotland is immediately welcomed back into the bosom of the EU after leaving the UK.
I have no doubt the EU will wish to do this, even if it costs them money, simply to undermine the rUK. If it does, we will have the same border issues as in NI, with food and livestock inspections. Also they will have to adopt the Euro as their currency, so that will cause immense friction in trade.
After the Brexit experience, I cannot even imagine the full legal process of splitting the UK. The Treaty of Union has no equivalent of Article 50. It was signed in perpetuity. It gave the "Great Britain Parliament" sovereignty in all matters, except that legal advice is that the GB Parliament does not have the power to dissolve the union. This was intentional, because otherwise one party could dump the other if it thought the other was costing them money.
If not even UK parliament can legally dissolve the union then what can? The only thing I can think of is that a new Treaty of Union will be negotiated, this time with an exit clause. But even here you have to ask who is legally recognised as the Scottish "side" in the negotiations? They have no supreme body, the Scottish Parliament is just local government and subservient to Westminster.
It's worth thinking, what would happen if rUK attempted to "dump" Scotland? What would be the legal process and what would be the international reaction?

No one will buy from a hostile market. Simple really. Even Sturgeons low rent followers wouldn’t buy a pint in a pub that hated them ! Would they ?

She’s another menace to this country

There is a movement in this Country to buy British, if Scotland decides to become Un British then the people will start to boycott Scottish goods. Sturgeon is not being honest with the people of Scotland, it will be sad if the Scottish people choose independence but the rest of the UK must respect their decision and let them go.

Makes a very good point - when your economy is smaller than your biggest market, it's craxy to unhitch yourself from it.
I'm sure I've seen that somewhere before...

Why have you lot now turned to rubbish the Scottish Independence campaign?
Is it a cry for relevance?
Are you avoiding discussion surrounding you catastrophic Brexit situation?
Is it because there's zero positive news surrounding your catastrophic Brexit situation?
Your simplistic one pagers are old hat, we've seen this lying propaganda for the last 5 years, turn the page and be original FFS!

Seemed to have touched a nerve, rejoiners are wailing again... ;) They have no real answer to anything as ever, just the usual bitter nonsense. AJ AC and incarnations of them a good example for this. They have been reading this website for 5 years, at the same time claiming there is nothing worthwhile to read. Are they strange or what?